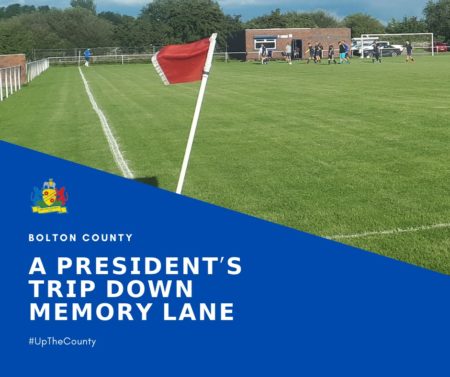 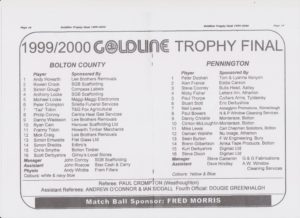 The Football Club from the middle of the nineteen nineties began to develop at a very rapid rate both on and off the field of play.  This can be clearly seen if you look at the Club’s Honours Board on the Club’s website both at Senior level and the top end of the Junior level.  People in years gone by had built the Club on sound foundations from 1948 onwards and all their hard work and dedication was now beginning to flourish both on and off the pitch.

In this competition the Club was the first Lancashire Amateur League [LAL] team to be invited into the competition mainly because of its facilities which were now capable of hosting these matches.

In some quarters, eyebrows were raised by some of the other local Clubs in the area which participated at higher levels in the structure than us, at the time the Club was not even in the Premier Division of the [LAL] 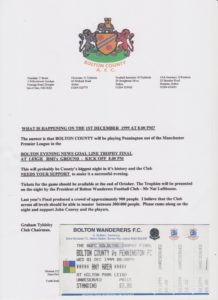 As I had said in part 2 of my memory lane writings under my reference to John Conroy’s management, the team was an outstanding team and it was on the up. On the road to the final the team won its Mini league of five teams. It then beat Turton 2-0 in the quarter finals and finally Tempest United 2-1 in the semi-final to reach the final against Pennington United who at that time and now at this present moment in time are with us in the Manchester Football League [MFL] Premier League, which is on Level  7 of none league football pyramid.

On the night of the 1st December 1999 we played them at Leigh RMI’s FC ground at Hilton Park Leigh which was their temporary home which they shared with Leigh Rugby League Team. The playing surface was more suitable to rugby than a football Match with regards to the height of the grass. Only two finals were played on this ground before the competition organisers finally got to see their dreams become a reality, that of playing at the Reebok Stadium. We just missed out on that possibility. As we all know the competition went from strength to strength and is greatly missed by many of us who were involved in its development which brought together teams of mainly the same levels but from different leagues some of which had played each other in the old Bolton Combination days. When quite large crowds gathered to watch and support their local team.

The game was played in atrocious conditions.  Heavy Rain, a Hail Storm and at time the rain seemed to coming in horizontally from one open end in what was quite a big stadium. At one stage it was thought the game may have to be called off because of standing water on the pitch. Both teams surprisingly produce a good standard of football with a crowd of round about 900 people watching. This was probably was and is still the biggest crowd to ever watch the club play to date.

Unfortunately for us we lost the game 5-2 but up to the last 20 minutes at 3-2 down we were still in touch, it was quite a close encounter. After the first eleven minutes we were 2-0 up but by half time they had pulled it back to 2-2. In the second half we had chances but Danny Christie a well-known goal scorer at this level completed his hat trick scoring two more to add to the one from the first half.  For the Club it was a great night but not the result we would have wanted. In fairness to them on the night they were the better team. The team was run by Andy Whittle and John Roscoe because John Conroy was in Tenerife which was a real disappointment for him and the Club. Perhaps he found more satisfaction the following season 2000/2001 when he took the Club into the [LAL] Premier Division for the first time in its history. Where it stayed till leaving the league in 2004.

Both Clubs realised that a large amount of money could be raised for their Clubs from different forms of sponsorship some of which is reflected in the team sheets of both teams attached.

The organisers of the event gave each finalist a blue print of how to raise money for their Club and we managed to raise approximately £800-00 when all the dust had settled.

Attachments [2] The team sheet for the night from the programme.