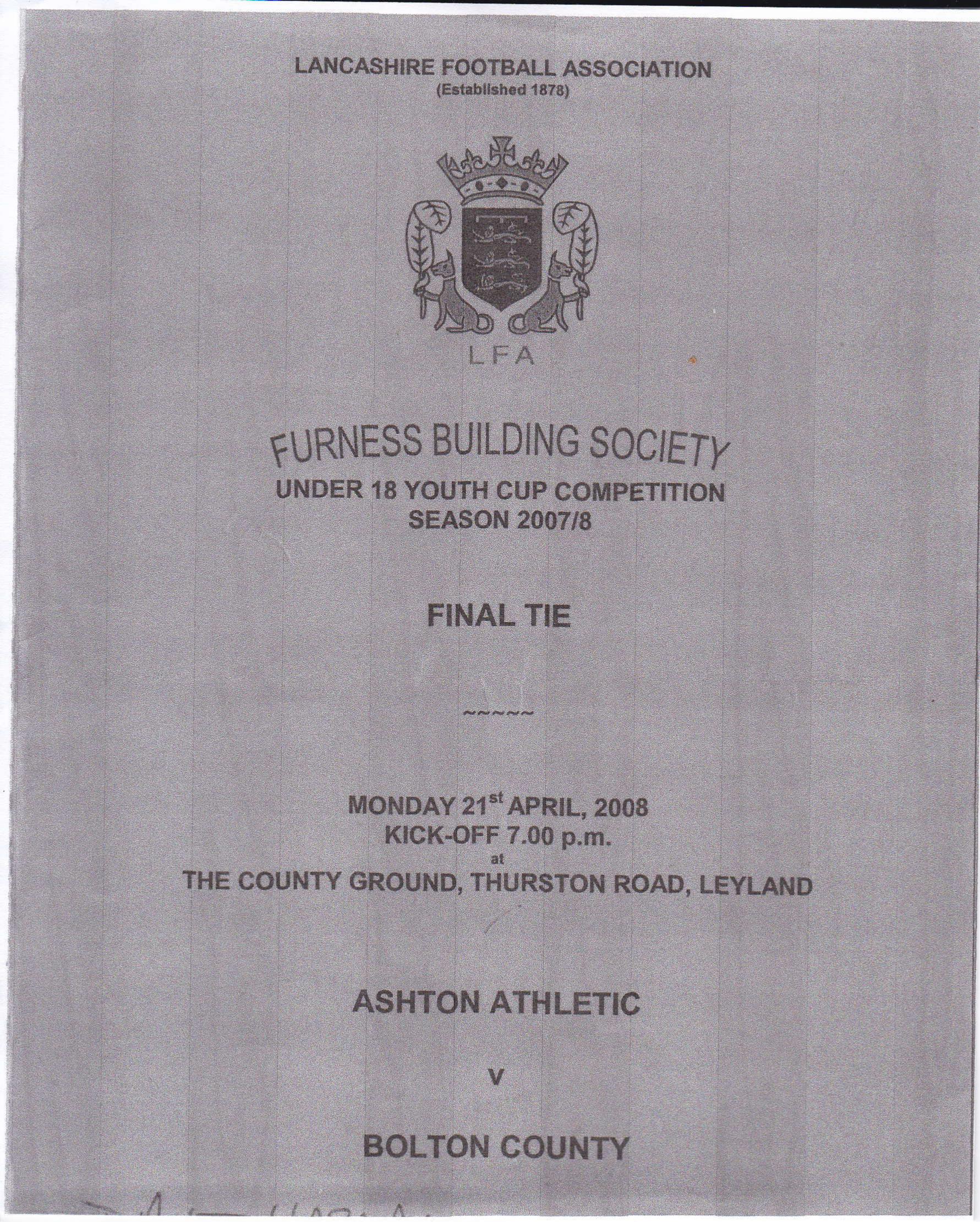 This was a massive operation for the clubs Club’s Committee to co-ordinate as the junior section at that time, was very large, with over 25 teams ranging from 6 years old to 18 years of age, whilst the open age had four teams, and took some four years to really complete a fully structured organisation. A special note of mention to my friend Dave Prytherch, who became secretary of both the junior and senior teams, a position he held for a number of years and made the transition possible. Only a Liverpudlian with his sense of humour could have achieved that feat. The main long-term goal was to produce a conveyor belt of quality players to feed the open age section to take the club up the pyramid system of the football league. A fine example of this is TOM ASPEN, who was man of the match in the LFA U18’s youth cup win and is still currently playing for the first team,

The Lancashire Evening Post Sunday league as it was then, gave the club a means of developing this strategy and over the years proved to be a of great benefit. Even today as we watch the first team competing in the Manchester Premier Division, we who have been on this journey from the beginning can see the fruits of all the hard work put in by so many people. One only has to visit the club’s website, to see the honours the club has won under different managers over the years, to see the positive impact this has had for Bolton County. Kevin Aspen and Phil Larkin who this team were the start of this long line of success, winning their league and the L.F.A. Youth cup to complete a unique double.

The last club from Bolton to win the L.F.A. youth club was Bolton Wyresdale in 1984-85.

Bolton County are the first team from the L.E.P. Youth section to win this prestigious trophy and the joy on the faces of the players, managers, league, and club officials, reflected this magnificent achievement. Let us be frank about this, Bolton County won the cup on merit and against all the odds, overcoming favourites Akzo Nobel of Accrington in the semi-final and then then defeat the strongly fancied Ashton Athletic in the final.

Any injury time strike from Man-of-the-Match ‘Tom Aspen’ won the LFA Under 18s Cup for Bolton County and handed the L.E.P. Sunday league a unique double at both open age and youth level.

As the teams lined up for the pre-match ceremonies, their opponents looked formidable, they appeared to be bigger, stronger, and boasted four Lancashire County players in their ranks. Ashton took the lead from a Wayne Smith penalty in the 12th minute, following a rash challenge just inside the penalty area. As the first half progressed, County grew into the game and they had the better chances in the first half, their approach play up to the penalty area was excellent, but their finishing was off colour.

Bolton County equalised in the 55th minute, following a break away after sustained pressure by Ashton, Tomiko Jelenje made a fine run down the right wing before delivering an exquisite cross which needed the finest touch from TOM ASPEN, game on.

Now the game became an enthralling contest watched by Sir Tom Finney, Tommy Thompson and Fred Else (all ex-Preston N.E. players) who commented on the hard work and skill of both teams. Both teams had chances and the game was on a knife edge until the 91st minute and with extra time looming, it was left to that man again TOM ASPEN, who latched on to a cross from Curtis Taylor, to smash the ball home.

Bolton County showed on the day, that the biggest prizes can be won by disciplined team, who are well coached and have a superb team spirit. Winning the L.F.A. U18’s Cup against all the odds and meeting one of England’s all-time greats, Sir Tom Finney, is not a bad night’s work. 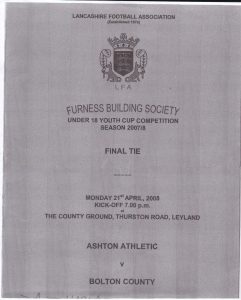 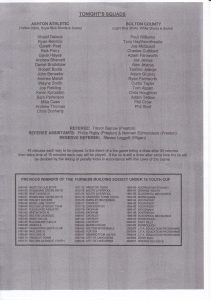 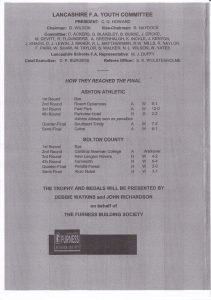