National Success for the Vipers U14’s

National Success for the Vipers U14’s 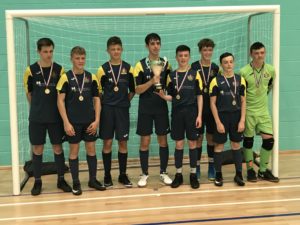 Bolton County Vipers have been competing since the beginning of April in the Lancashire FA U14’s Futsal League. The reward for the winner of this league was to represent Lancashire FA in the Regional Finals for the North of England.

The Vipers eventually topped the group and took their place in the Regional Finals held  at Manchester City Academy, they triumphed against formidable opposition from Cheshire, Greater ,Manchester, Merseyside and Cumbrian FA’s and progressed to the National Finals.

We went to the National Under 14’s Finals 0n Sunday 24th June which was the most official, well organised event I have ever attended and was reflected in the calibre of opposition we faced.

We were placed in Group A with 5 other teams and we finished top of the group with 4 wins and a draw.

This got us through to the semi final where we were beaten by Oxford Futsal Club who are a professionally run specific Futsal Club, who went on to win the tournament and are now National Champions.

Based on the group game victories and losing deficit in the Semi Final we were awarded third place by the organisers which is a tremendous achievement, as we were the only grass roots team there.

We will now represent the North of England in the National Finals in Birmingham later this month.