Saturday saw the team make their debut in the BBDFL with two matches against Turton Whites and Bridgewater Tornadoes.

Fortunately, the weather was fine and bright which makes a change from the opening day monsoon conditions we normally get! We had Oscar making his debut for the team after recently signing for us and with Archie being away on holiday it helped with numbers.

The first game saw us play Turton Whites. James volunteered to be keeper and it was good to have him with us after being unwell all week. As per usual the match started off end to end with lots of goal mouth action. Unfortunately, with it being non-competitive football we can’t say anything about the score line but at the end there were plenty of smiling faces and that was just the parents!

The Second game against Bridgewater Tornadoes was a closer match. Oscar and Ewen shared the keeping duties with both of them doing a great job. It was interesting to see how we faired with Ewen in the nets, but all the other lads stepped their game up and it ended in a draw, but again smiling happy faces all round.

Even at this early stage we are starting to see them gel more as a team as they get bused to each other, in the months a head there will be plenty of time to work on passing and positions but at this moment it’s just great to see them all enjoy themselves, although I don’t know which they enjoyed more the matches or running up and down the hill while we waited for our next match 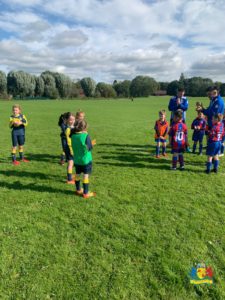 This morning saw the Under 7s girls play their first match in the ELFA boys league and what a performance!

The girls were on top from the very first minute when great perseverance from Evelyn saw her despatch the ball calmly past the Rosegrove keeper. Pearl soon doubled the lead and the girls were certainly enjoying themselves.

More goals followed from Pearl, Alicia, and Evelyn and at some points in the game the score line saw the boys bring an extra player into the action.

There was great defending from Melody and Helena, with Grace, Aurla, Melody and Alicia taking it in turns as the team’s goalkeeper.

The girls more than matched the boys for strength, pace, desire and skill and they can’t wait for the next game 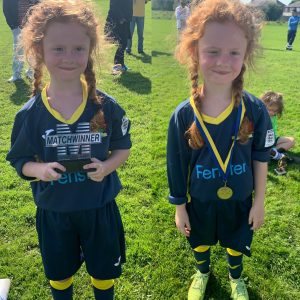 Players from both age groups played a match against each other this lunchtime. This enabled all the girls to get valuable game time and a chance to play in different positions.

It was great to see so many different players do well. Pippa was one of the stars scoring five goals. Her pace and control when running with the ball was top class and she calmly and skilfully rounded the last defender several times before coolly scoring. Niamh ran the length of the pitch twice to score two fabulous goals, showing that there is far more to her game than tackling at the back. It was brilliant to see the confidence grow in each of the players.

Esme scored the first goal and was always in the thick of the action, her battles with Helena were fearsome! Myla was calm and assured in goal and I even heard her shouting to claim the ball at times. Leila played for the Under 8s today and grew in confidence with her tackling and running with the ball as the game went on.

For the Under 7s both Grace and Aurla volunteered to go in goal. Alicia captained the team well and showed off her considerable pace and finishing by bagging herself another two goals.

Grace scores the goal that her usual industrious play deserved, and Helena was extremely unlucky not to score her first ever goal. Helena is a great defender who uses her body well to shield the ball and when she played further forward in the second half, she made several marauding runs with the ball taking on players as she did.

Noor Bibi and Aurla showed great enthusiasm and Noor Bibi got more involved as the game went on, showing her ability on the ball whilst Aurla was happy to sit and wait in defence to stop the under 8s attacks. Both girls always play with a smile on their faces. Evelyn came on for the last 5 minutes to help the Under 7s and showed her considerable ability with another goal almost straightaway. 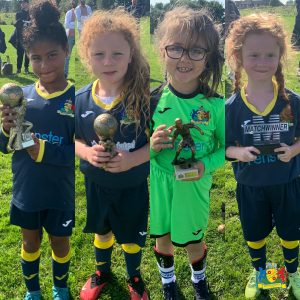 The girls started very slowly in this game and soon found themselves two goals down. Aiyarnna then pulled a goal back but Ramsbottom scored more goals and were leading comfortably by the end of the first quarter playing some good football.

The girls started to wake up and it was no surprise that the introduction of Pearl into the game started to make a difference.  The only problem was that the girls didn’t have their shooting boots on and despite starting to dominate the play shot after shot either went wide, hit the woodwork (3 times) or went tamely to the keeper.  Goals from Pearl and Melody made the score line a little closer.

By the third quarter the County Girls were flexing

their muscles and starting to dominate. They drew level through goals from Aiyarnna and an own goal which set the game up nicely for the final quarter. The girls just kept going. Their determination is amazing and further goals from Pearl, often running from her own half, finished the game.

Another great game for the Under 8s. Well done girls 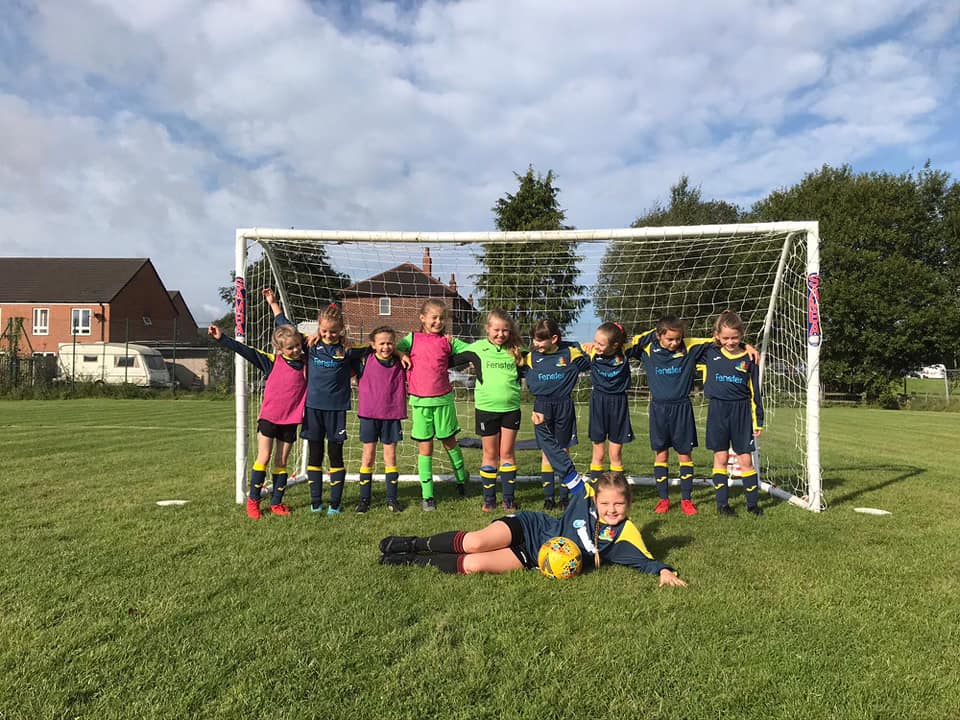 What a lovely morning it was for football.

The girls started on the front foot from the off. There passing ability and position play was fantastic. The ball was being passed around the pitch like a ping pong ball.

There were lots of great tackles and shooting in the first half of the game and the girls were all helping each other.  There were some great saves from Bonnie and Isabelle. Credit to Isabelle for helping our opposition out in net and pulling off some great saves.

Second half started and all I asked the girls to do is exactly the same as the first half but to talk to each other more, and that they did!

There was some very good play for all the players today, the girls are beginning to read the game more and able to help each other out in different positions.

The girls have done a lot of training around holding their position and you could certainly see that today.

Kendal-Leigh did a fantastic job as captain this morning, leading her team like a champ.

POTM: Annabelle, for her outstanding performance today and captain for next week..

So proud of all the girls today amazing effort. 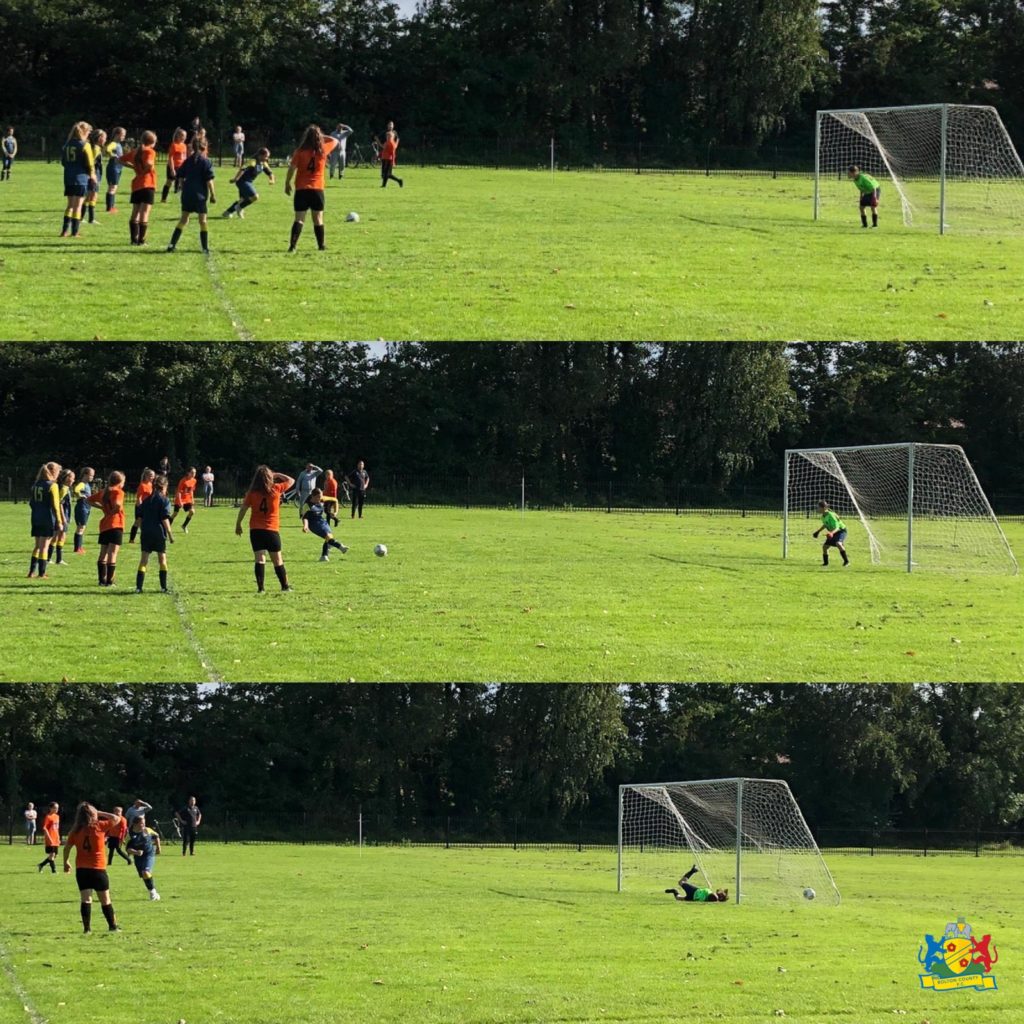 It was a difficult away fixture to start the season for the U12’s this morning against a strong opposition. Through no fault of our own we found ourselves two nil down within three minutes of the game and it wasn’t long before Winton went 3 goals ahead after a slight mix up in our defence.

The score at this point didn’t reflect the game as the girls were making their own chances but the shots were finding the side netting.

It took some individual skill by Emily to start the comeback. Emily skipped past the defence with her pace then unleashed a tidy finish onto the side netting, this time in between the posts. After a quick drinks break due to the rising temperatures we was awarded a penalty for a push in the back. Captain Lily L stepped up and side footed the ball home giving the keeper no chance!

HT 3-2 and the girls were deservedly back in the game.

The second half started the same as the 1st as we conceded to a well worked goal that trickled over the line. This didn’t dampen the spirits as we were playing some good football.

We put more pressure on their defence looking for another comeback. We were awarded a free kick on the edge of the area which Lily L expertly found the corner with a powerful drive over the wall.

Because of good running off the ball the girls were finding more space to attack, and the comeback was complete with 5 minutes remaining as Lily L who was unstoppable at times turned in the area and found the bottom corner. It was a goal the girls thoroughly deserved. 4-4

It was a game where all the girls deserved to have a special mention as they showed everything today. With no subs in the sun they never gave up, working for each other and showed what you can do when you play and work as a team.

Lily put in a captain’s performance wherever she was asked to play. She was vocal at the back and going forward she was unstoppable at times. 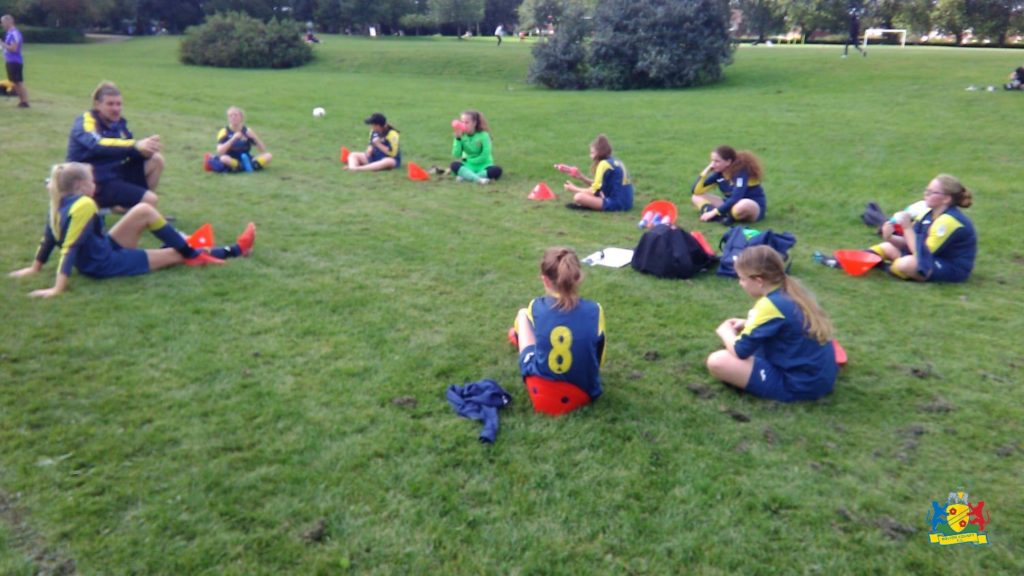 The girls soon took the lead when a nice corner routine saw the cross find Isla at the far post, 1-0. Isla doubled her lead soon after following good work from Erin and Charlotte, before completing her hat-trick on the 12th minute mark after a loose ball fell kindly for her in the box.

Not at all satisfied with that twelve minute hat-trick Isla went on to her double hat-trick well before half-time, with some fine solo play and also an assist from Amelia.

The second half continued in the same vein as Isla played in Amelia for her second and Isla pounced on a rebound after a fine run by Erin. Amelia completed her hat-trick as she powered through to fire the ball into the back of the net. The goals continued aplenty as Flo ran through into the space cleverly vacated by Charlotte and slotted the ball home and Isla decided it was about time she scored again after some fine passing cut through the opposition defence.

Amelia rounded off the scoring with her fourth to give the girls their most comprehensive victory as a team. The management team also took the opportunity to move the players around in different positions in the second half which went well. 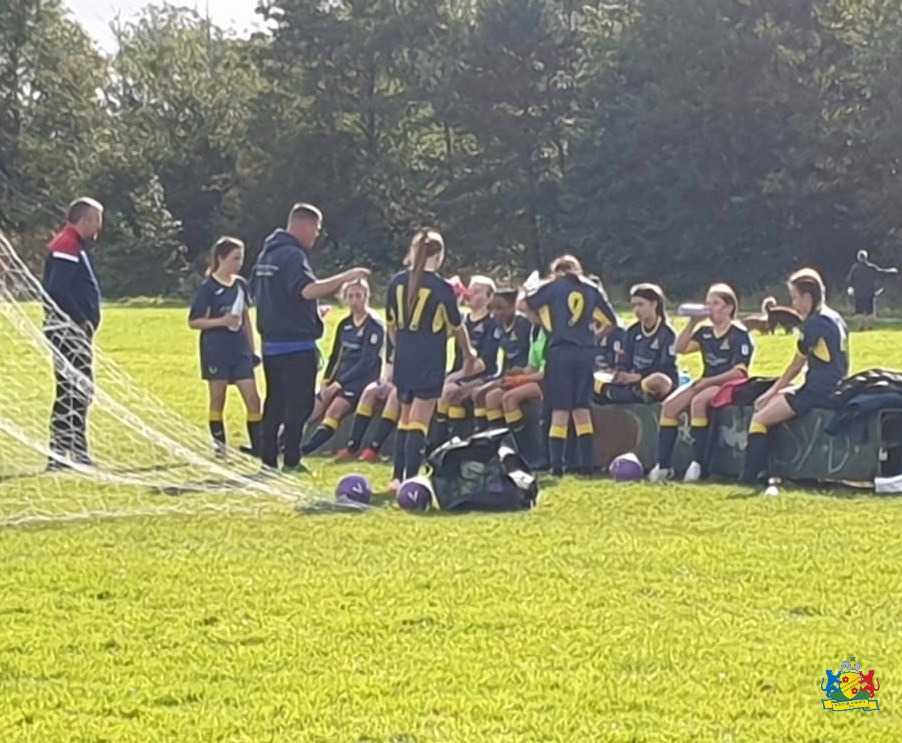 The Under 14s played their second game together against a team a division higher.

The girls are bonding well as a team and work incredibly hard for each other. Maddison and Miranda pressed their defence well, with Sofia and Layina supporting them, running at the defence, and taking players on. The girls created chances to score but were unlucky not to find the back of the net. Truly Christy and Izzy ran everywhere in the middle and Amelie was coolness personified with a class display at right back – calm on the ball at all times playing it into the forwards and wingers. Aimee, Jaylea and Millie again did their bit in defence and tackled well.

POTM:  Today was a hard one as it could have gone to a few players. Step up Ava, who put in a star performance in goal with a number of saves well done ️.