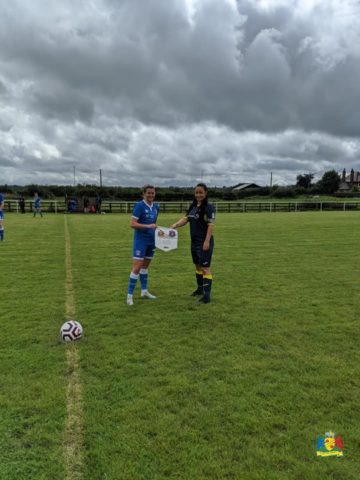 Today’s fixture marked an important milestone in the history of Bolton County Football Club. It is only 14 months since the women’s team was formed and has integrated well into the County family.

Playing the first home game at the County ground is a significant step forward and thanks have to be given to the club directors who have had the will and foresight to make today’s match a reality.

We started frantically playing the occasion rather than the match. We were on the back foot for a long period against a good footballing side. Once we settled into the game, we managed to get a foothold and started to play the football we are capable of showing. We then scored against the run of play with a quality strike from Becci. The goal boosted the girl’s confidence, and this was reflected in their play, which went to the next level.

Carlisle had several chances that they could not covert and also hit both the bar & post. Our goal was leading a charmed life. Eventually they got a breakthrough and equalised. Not long after we took the lead again through a move down our left-hand side and Emily crossed the ball in for Kelly B to finish.

Unfortunately we could not hold on for the win when they broke free from the defence and slotted home to equalise for a second time.

The team displayed great character and upped their game against a team 3 divisions higher and showed how far we have come in just over 12 months.

Player of the Match
Emily

We could not think of a better opposition than Carlisle United to help us celebrate the occasion of our first match at the club’s home. Thank you to them for travelling down to provide us with a worthy opponent. We are hoping this is the start of an annual fixture between the 2 clubs.